The Federalist Cabernet Sauvignon 2016 from Lodi by Philip S. Kampe

Tagged as a ‘Revolutionary’ wine by the producers, this 14%, predominantly (93%) Cabernet Sauvignon from Lodi, at $17 a bottle is a real steal.
The purplish red hue and nose of cinnamon and tart cherry fool the palate of the drinker. The 5% usage of Zinfandel, aged like the Cabernet Sauvignon for 15 months in 35% new oak, is the backbone of the wines character,
The palate flavors are characterized with nuances of blackberry, black cherry, plum, strawberry, raspberry, vanilla and chocolate. Medium tannins, with a soft, rather dry acidity make this wine most desirable. Add some oakiness and earthly characteristics and you have a funky wine.
For a wine in this price range, it has everything you want.
California Cabernet Sauvignon enjoys the same status as in its native home of Bordeaux. It is a prized grape, known for its long aging potential.
As far as food pairings go, I would suggest game, lamb and beef.
DNA testing has proven that Cabernet Sauvignon is actually a cross between Cabernet Franc and Sauvignon Blanc.
How interesting! 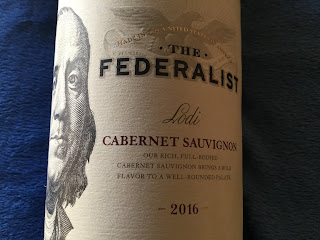 By PHILIP.KAMPE@TheWineHub.com - September 26, 2019 No comments: