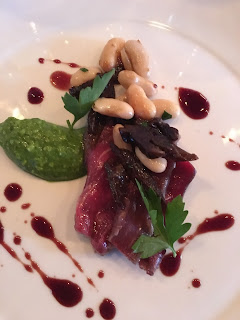 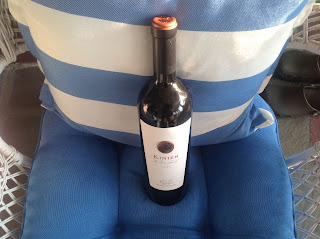 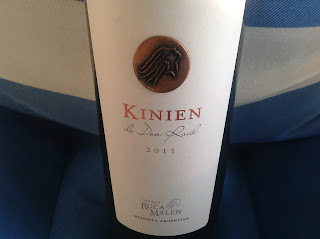 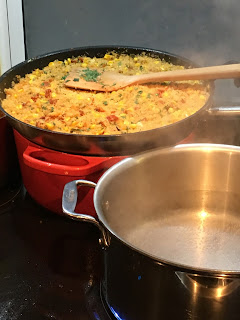 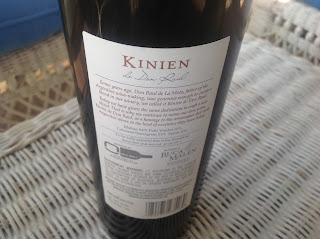 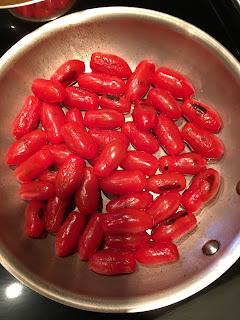 Ruca Malen Winery is world famous for its development and success in creating a tasting menu concept at its in-house restaurant in Mendoza, Argentina. The goal of this project is to express the terroir in each of the elements that make up the experience of pairing Ruca Malen wines with the local cuisine. I have not visited the restaurant at the vineyard in Mendoza, which is open to the public for lunch, daily, but had the next best thing possible.

Chef Lucas Bustos and his staff flew into New York to host a traditional wine pairing dinner in the same fashion as the restaurant of Bodega Ruca Malen does in Argentina.

I was fortunate enough to receive an invite to this special occasion, which took place at a private kitchen and event space at The Kitchen Table, 132 Mulberry Street, smack in the middle of Little Italy and next to Umberto’s restaurant, known to our family for their signature dish of Linguini with white clam sauce, made, according to my wife, the same way as her Neapolitan mother made fifty years ago.
Enough said….

As I entered the beautiful and aromatic space, I was immediately handed a large glass of 2015 Ruca Malen Yauquen Torrontes, a white, floral wine from the Salta region, in northwest Argentina. The area is known for Torrontes, a wine that that is made in stainless steel tanks and is quite forward and pronounced in flavor. My glass was fresh and crisp with just the perfect balance of tropical fruit, enough to make one consider the wine as an aperitif.

Later in the evening, this wine was served with a lemon, chili, herb marinated yellow squash appetizer. The elements of acidity in the dish balanced perfectly with the make-up of the chilled wine.

Winemaker Pablo Cuneo said that the wines for the dinner were picked specifically to pair with the foods that represent our country of Argentina. He alluded to the fact that the winery was founded in 1999 by two French men. The idea was to produce world class wines. Pablo added that the right place for the wine is the table. One of our goals is to find some similarities with the wine and food. A second goal is to look for a balance with the wine and the food. The acid of the wine balances the fats from the dishes. And thirdly, we look for density in the wine. These are our three goals as a company and mine as the winemaker.

Chef Lucas added that the restaurant at the vineyard was conceived in 2004. I am considered a pioneer in the industry.  Pairing the local cuisine with the wine has now been followed by my peers worldwide.

Winemaker Pablo added that the name Ruca Malen was made-up by the French vineyard founders. He said, Ruca means house and Malen means young lady. We were asked why did the Frenchmen choose that name?

Chef Lucas asked us to pretend that for tonight’s dinner, we will be in Argentina. Lucas stressed that ‘We don’t go to farm and table, since farm and table are in the same place.’ Usually we share food and wine with friends. Imagine that this is 400 years ago. The food we will eat for dinner focuses on the history of the Argentinean.

Dish: Carob dough stuffed with Malbec braised rabbit in a nut and potato emulsion
Wine: Yauquen Malbec 2014 Red (Mendoza), juicy and velvety on the palate ($13)
Pairing: The sweetness of the carob pairs effectively with the cherry, fruity, sweet overtones of the balanced wine/

Dish: Cured and olive oil marinated Angus beef on top of a bean salad and Malbec glazed sauce.
Wine: Reserva Malbec 2014 ($19) (Diaguitas, La Rioja) Aged 12 months in oak barrels, both French (85%)  and American (15%)
Pairing: The oily notes and fleshy textures in the dish are balanced by the tannins in the wine. The creaminess of the stew tastes velvety due to the wines innate characteristics.

Dish: Curanto-style braised osso buco with roasted vegetables. Curranto cooking is a technique of underground cooking that involves hot stones.
Wine: Reserva Petit Verdot 2013 ($19) ( Mapuchas) A well balanced, aromatic, complex wine aged for 12 months in French (80%) and American (20%) oak.
Pairing: The balsamic elements of the wine are a perfect match for the unusual texture of the braised meat and smokiness of the vegetables.

Dish: Dulce de leche cake with orange sauce and vanilla ice cream.
Wine: Ruca Malen Brut made with 75% Pinot Noir and 25% Chardonnay. Twelve months of leese contact makes this traditional methode sparkling wine a real contender.
Pairing: The acidity in this dessert balances with the finesse of the wine.

History of the vineyard as told by Winemaker Pablo Cuneo:
The vineyard was founded in 1998 by two Frenchman, Jay Pierre Thibaud and Jacques Louis de Montdembert. Pablo Cuneo, already well known internationally, was hired as their winemaker. His job, as winemaker, was to balance French winemaking techniques with Argentine character. The wines must be elegant enough to pair with the food that is inspired by the rich culture of Mendoza. Lucas Bustos was hired as chef. The rest is history.
In 2015 Ruca Malen was acquired by Molinos Rio de la Plata, Argentina’s most prominent food and beverage broker. Their vision remains the same as the founders, Jean Pierre and Jacques Louis. 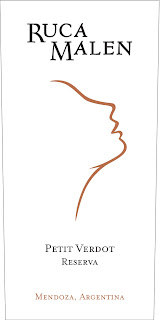 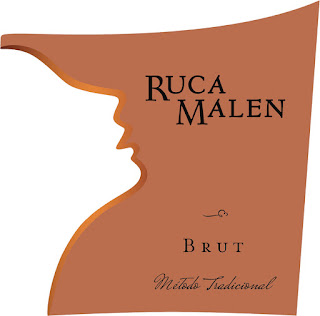 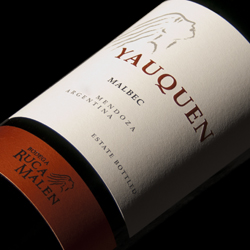 Arneis--A 'Trendy Grape' For All Seasons by Philip S. Kampe 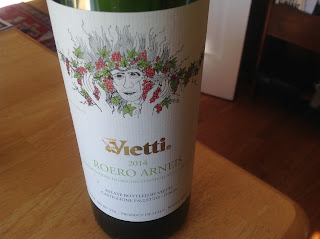 Arneis: A Trendy Grape for All Seasons

In the last decade, the presence of wine at the bar scene has grown by leaps and bounds.  Each year a new wave of young wine consumers joins the ranks of the ever expanding wine market. With so many new wine drinkers, bartenders have become the wine director of their establishments. The bartender is the ‘go to’ person for recommendations. Bartenders need to know what the next wine trend will be. One year, Prosecco was the trend, next came Moscato, then Sauvignon Blanc from New Zealand and now Rose. What is next?

Enter, Aldo Zaninotto, wine director of Chicago’s popular Osteria Langhe restaurant. If it were up to Aldo, the new wine trend would be Arneis, a little known white grape that is grown in northern Italy’s Piedmont province.

Aldo says, “Arneis is known as the ‘little rascal’ in Piedmontese dialect, because the grape is so hard to cultivate. It is one of the most important white varietals among the DOCG whites in Langhe. With its profile of minerality, floral notes and orchard fruits, Arneis is a perfect white wine for all seasons. Arneis is very food friendly.  I carry numerous styles of Arneis on my wine list at Osteria Langhe, including Vietti (by the glass), Bruno Giacosa, Careglio, Recit, Giacomo Fenocchio, Cecu, Marchesi di Barolo, Damliano and Ceretto. The customer response for Arneis has only been extremely positive, making new fans everyday. Arneis sales are near the top of my white wine list. If someone tells me they drink Pinot Grigio, chances are they like drier wines, like Arneis. I don’t carry Pinot Grigio anymore, as Arneis is the perfect fit on any wine list. It has satisfied my customers’ curiosity about trendy wines. If you or your wine program are searching for a new grape, Arneis is the answer.”

As a wine writer and an experienced wine taster and judge, I agree with Aldo.

Arneis has satisfied our summer visitors who expect a Sauvignon Blanc or a Vinho Verde with the array of seafood that we serve to our house guests. Since I grew up in New Orleans and had beer with seafood on most occasions, a cold glass of Arneis has filled that void. (Yes, an old dog can learn new tricks)

Constance Chamberlain, co-founder of Wine & Company represents Arneis. If you have questions or need recommendations, feel free to contact her at: www.wineandcollc.com

Aldo Zaninotto can be reached at: www.osterialanghe.com

Arneis, technically, has been known as: Barolo Bianco, Nebbiollo Bianco, Bianchetta and Bianchetto.
The grapes history goes back to the 1400's. It was found in the Roero region. Traditionally, the grape was used as a blending grape to soften the tannins of the red Nebbiolo varietal. Recognition for the Arneis grape began quite recently, in the 1980's.

Drinking Arneis within the first two to three is still the mantra.yet, aging is possible, thanks to the new breed of winemakers.

The grape has a medium body and acidity. Minerality can be found in its sour apple and grapefruit characteristics. 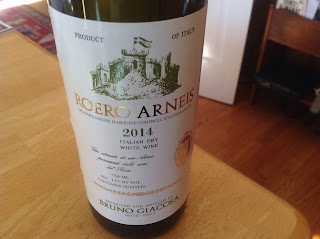 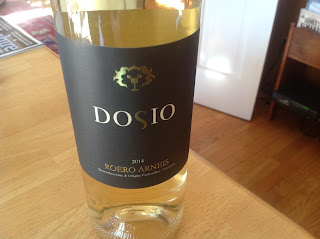