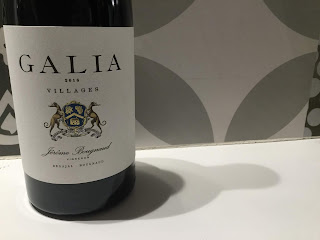 The area in and around the Duero is rich in clay, limestone, sand and gravel. The vines are situated somewhere between 2,700 and 4,000 feet (800-1000 meters) and are hand harvested from more than fifty (50) parcels scattered along the Duero River, which include  the provinces of Galia, Segovia and Valladolid

Galia was the province that Jerome Bougnaud personally rescued. The vines, as explained by Nicola Thornton of the Spanish Palate (www.spanishpalate.es) were abandoned  and became a personal project of Bougnaud to rescue the old vines in and around Ribera del Duero. Jerome Bougnaud comes from a family of winemakers. He is the fourth generation, whose roots began in the Cognac region of France.

Bougnaud has established himself in Spain, having worked with Peter Sisseck at Quinta Sardinia, Pingus and El Regajal, where his friendship with Danny Garcia-Pita began.

Galia.s claim to fame and consistent high ratings have come from the complexity of the wine, in part, due, to the soil profile and the old age of the vines. The abandoned vines were close to, but, outside of the Ribera del Duero region. It seems that location doesn’t matter, as the wine truly represents what the Duero Valley is all about.

The three grapes used were from different areas and from different soils. They were fermented separately with indigenous yeasts in French barrigue. Unparalleled balance, mid-palate seduction and summers freshness describe the end result of this project of Jerome Bougnaud and Danny Garcia-Pita.

GALIA 2016 is age-worthy and can be cellared for years to come.
By PHILIP.KAMPE@TheWineHub.com - February 05, 2020

Nice information, valuable and excellent design, as share good stuff with good ideas and concepts, lots of great information and inspiration, both of which I need, thanks to offer such a helpful information here
click this link now