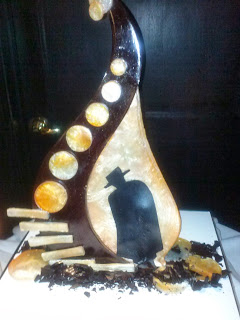 George Sandeman, Chairman of the House of Sandman, expressed that his family has been an active member in the wine business since 1790. George is the Seventh generation family member to be involved in the Sandeman family business.
The original George Sandeman, a Scotsman and businessman, bought a wine lot in London in 1790 and began the family business  (220 years ago).
During those days (1790) the wine interest in the British Isles was primarily focused on wines from the Iberian Peninsula.
Sherry and Port wine was the goal.
George Sandeman learned quickly that to make a success in the industry, in its infancy stage, he must immerse himself in the fermented wines from Portugal.
Within months, George Sandeman, the businessman, bought a winery in Xerea and one in Porto.
The company legacy began.
Since those days, the Sandeman company has been a successful and well respected player in the port business.
One of the present day George Sandeman’s Great-Great Uncle married a Portuguese woman with ties to the wine business, thus reinforcing the link to Portugal.
In fact, George’s father married a woman from Jerez, thus consolidating the link with Spain.
All of these tactics helped boost  the House of Sandeman into being recognized as a ‘World Leader’ in the industry.
Recently, I had the privilege of spending an evening with the modern day George Sandeman (53), sampling an array of magnificent vintage ports.
The evening began with a 1955 Vintage Porto. George explained that in 1955, even though he was two years old at the time, the weather conditions that year ran the gamut from freezing cold to burning hot. The extreme weather created a higher than average sugar level in the grapes, thus producing wines that were exceptional, hence a vintage year. My glass was filled with a wine that was see-through brown in color with a hint of pumpkin orange on the rim. The aromatics for a 58 year old port were incredible—spice on the nose followed by cedar, sweet balsamic and the classic ‘cigar box’ aroma. My palate was bathed in acidity and tannins followed by a burst of pepper and northern Indian curry. The acidity created a long, complex finish.
The evening was off to a good start.
Following the 1955 was the 1963. The weather was steady that year and lacked the extreme conditions that made the 1955 a standout.
According to George, 1963 was destined to become a vintage year. The wine in my glass was ruby tint in color with brownish hues. The complex aroma resembled truffles that were recently pulled from the earth. Add classic balsamic and white pepper aromas and you have the beginning of a solid port. My palate couldn’t escape the pronounced acidic and tannic structure that led to a long and lingering, complex finish.
1963 was a good solid year.
Next on the agenda was the 1977, a year where the weather conditions were considered perfect. The glass was glowing with orange and red hues. The nose was floral with hints of red fruit and lavender. My palate exploded with spice, tannins and acidity.
Still young, the 1977 shows promise for longevity.
The 1980, my personal favorite, is a ruby wine with intense aromas that make it spicy on the nose—ginger, cinnamon, white pepper and cacao. The intense, nearly dramatic tannins coupled with the acidic red fruit on the palate make this port in a league of its own. The spicy, long finish showed structure, depth and complexity.
The 1980 has many years ahead of it until it reaches maturity. I look forward to reaping the reward, as I have two bottles in my collection.
An early spring with dry and warm temperatures favored the 1997 vintage. Its deep ruby color paired aromatically with black fruit, cacao, cassis and wild flowers help make this an exceptional vintage. My palate felt lively tannins and strong acidity. Add chocolate and red fruit tones to the scenario and you have a port that is maturing classically.
The 2007 is an example of a very acidic, well structured wine that is dark purple in color. Firm tannins coupled with an extremely long finish point to an overly complex long and firm finish. Red ripe fruit aromas paired with subtle hints of pepper and clove dominate the nose.
The newest release, the 2011 Vintage Porto, was an immediate hit, due, in part, to the uncharacteristically low temperatures in July and August. The weather conditions helped create grapes with optimum levels of acidity, thus enhancing bottle-ageing potential. I found the deep purple 2011 to have dry tannins paired with a liberal amount of both red and blue fruits in the mouth, followed by a long, dry finish. The acidity level is high, lively and powerful, thus creating a classic vintage year.
All of the bottles that I sampled were decanted ten days prior to tasting by the winemaker.
Sandeman’s symbol, the Don, was created in 1928 by artist George Massiot Brown. The logo symbolizes the Spanish caballeros from Jerez, wearing a Portuguese students cape and wide-brimmed hat.
The Don is a dark, dramatic figure and turned into the Sandeman logo eighty- five years ago.
I hope to see him tonight! I believe Sandeman has the best portfolio of Vintage Ports. I, agree, the 1980 is outstanding.
It must have been a treat to sample the 1955.