Swanson’s Is Not a TV Dinner, but, a Napa Valley Vineyard by Philip S. Kampe 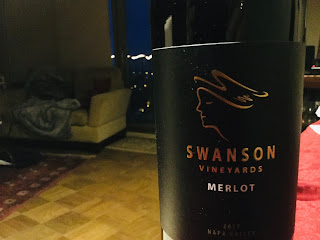 I remember eating my first Swanson’s TV dinner with my parents when I was in grade school. It was one of the rare meals my mother didn’t have to cook. She was a great cook, combining Hungarian and Louisiana recipes into unique dishes. Living in New Orleans was a big plus if you are fond of food and the flavors that make the dishes alive.

As one matures, the name SWANSON has taken on a different meaning. To wine worshippers, Swanson now means ‘Swanson Vineyards’ from Napa Valley California.

Sometimes I feel terrible when I open a bottle of the most recent vintage of Swanson’s Merlot because I know that if I age the wine 7-10 years, it will improve. That’s the time to buy several bottles so you never run into such a dilemma.

Swanson Vineyards is well known for their quad trellis system which protects the grapes from too much sun exposure. The grapes are hand harvested at night followed by a cold maceration. 2017 was a wet year, allowing ample water for the root system, hence, vigorous growth.

When you open the bottle, a melody of aromas fill the air. Not sure exactly what was in the air, but felt like blueberry pie crust danced in my nostrils. On the palate, heavy flavors of licorice, tin, cassis and ripened dark plums collided with uncanny tannins. After several hours, the tannins woke up and spread their wings creating a full-bodied rich wine that wants steak to show off its stature.

At 14.6% alcohol and $32 a bottle, a breath of fresh air for this young wine is necessary.

The technical sheet on the wine says it’s 100% Merlot, but, the bottle says, “ This delicious Merlot, deepened with Cabernet Sauvignon and Petit Verdot, goes with almost anything,” I’m guessing the deep, dark, garnet hue has extra color due to the skins of these grapes.

No more Swanson’s TV dinners for me- the only Swanson’s I want is the wine!