Lo Corb Wine on the Doorstep by Philip S. Kampe 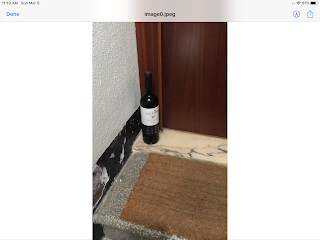 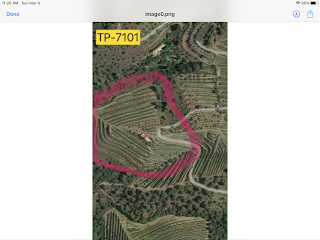 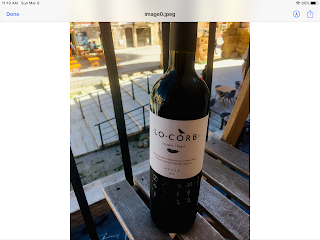 My WhatsAp pings three times. There is a message with photos.

Its from our landlord of our AitB&B in Tarragona, Spain.

Its a message, then two photos. One photo shows a bottle of wine on the doorstep-our doorstep.The other photo is a plot where grapes grow.

I reply to the message, only learning that our landlord, Albert, is also a winemaker and has land in the Corb Valley. He says he has a hectare, about two and a half acres. He focuses on the Grenache variety, with a small area for Samso.

It didn’t take too long for me to chill the bottle for a short time to 16C (59F). In the meantime, I learned about the Corb Valley. This is what I learned.

The Corb Valley, where the vineyard is, is a valley that has the river Corb flowing through it. Winds, known as the Marinada flow freely. It is an agricultural hotbed with olive and almond trees, grains , thyme and St. John’s wort.

The terrain, at least at the vineyard is slate. Castles, old churches and dry stone walls abound. It is an area where hiking is the best way to explore.

The vineyard is nestled in-between the landscape. Other crafts people exist in this environment. Besides wine, craft beer, artisanal cheese and honey are just a few of the spotlights.

Back to the 2011 Lo Corb DOC.
The wine has 14.5% abv, is aged for 12 months,  as I mentioned previously in French oak. The color is deep red, The bouquet is of the forest, with pine and dark fruit present. On the palate, which was a bit dry, soft tannins abound. I found it smooth, lush and rich with a lingering eucalyptus finish.

Albert and his wife, the owners of Lo Corb should be proud of their contribution to the wine world.  Its a World Class wine, one that should get Decanters sign of approval.