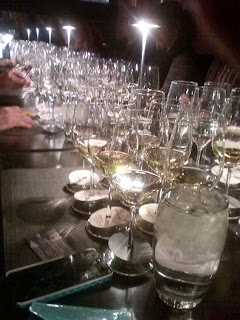 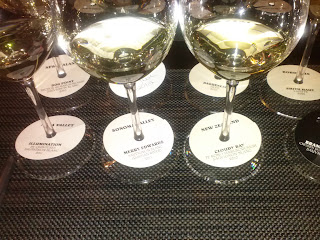 What a better way to highlight your ‘Special wine’, than to host  a Sauvignon Blanc ‘blind wine tasting’. Add seven other interpretations of Sauvignon Blanc from around the world to the tasting, plus yours from New Zealand and hear the results, first-hand, from the in-house wine experts.
Wine guru and maybe genius winemaker, Patrick Materman, from New Zealand’s Bancroft Estates (formally named Montana) explained how he ‘fell into his career’ as the chief winemaker for Bancroft Estates.
We were at Patrick’s fabulous Sauvignon Blanc wine tasting dinner, which was hosted by Bancroft Estates and new mother extraordinaire, Krista Drew, from Pernod-Ricard.
The event took place at Manon, 407 West 14th, located in NYC’s meatpacking district.
I could easily write an article about the food and wine pairing and how spectacular the food at this newly opened, four level, chic establishment was, but, I will spare you that scenario.
What I did learn is, if you are in the NYC area, this is a ’must’ restaurant to visit.
I am from New Orleans and am known to cook quite well, but, could not even attempt to compete with the innovative, creative, mouth-watering dishes from Manon’s Chef Tae Strain.
The evening began, as sixteen wine voices (journalists) joined Patrick Materman in an ‘around-the-world’ comparative wine tasting of Sauvignon Blancs.
Whether the wines were from California, New Zealand or France, it really didn’t matter—the newly evolved—and certainly leader of the pack of wines was ‘Wine #4’, CHOSEN ROWS Sauvignon Blanc from Bancroft Estates of Marlboro New Zealand.
The wine is not an overnight success, in fact, it has been years in the making,
According to winemaker  Patrick Materman,  it was the appropriate time to release the wine and put Bancroft Estates on the map as producing New Zealand’s highest level of Sauvignon Blanc to date.
It did not take long for us to agree, as a group, that the entry of ‘Chosen Rows’ has raised New Zealand’s standards to another level.
Think about this—the first Marlborough Sauvignon Blanc was not planted until 1973. The style remained the same from day one—expressive, melon, passion fruit, grapefruit driven, crisp and generally an easy drinking wine with personality.
Marlboro produces two-thirds of all Sauvignon Blancs from New Zealand. There is a 13% yearly growth, meaning that one day production will not meet demand, due, to the lack of acreage to plant new Sauvignon Blanc vines.
Winemaker Peter Materman explained that he has been with Bancroft Estates/Montana for the past 24 years (1989).
The new project, named the ‘Icon Project’, is based on creating a Sancerre with a New Zealand signature, adding more palate weight and texture to retain age worthiness with a Marlborough fruit expression flair.
Bancroft Estates used the Pinot Noir philosophy of taking crops back one bunch per shoot and harvesting by hand.
The project began in 2008 using fourteen different locations in the Marlboro region. According to Materman, both 2008 and 2009 were a learning exercise, extracting over forty flavor components from the wine.
By 2010, the lessons learned regarding hand harvesting, which create lower phenolics plus the use of larger oak barrels created the results they were after.
The release of 2010 Chosen Rows, only 3,500 numbered bottles is testimony to the ‘Icon Project’ as being a true success. Time will tell regarding the key factor—how will the wine age?
The 2010 Chosen Rows is in excellent company, having survived the ‘Blind Tasting’ with two $150 bottles from France, my favorite, the Smith Haut Lafitte Sauvignon Blanc 2010.
Obviously, I hope that the ‘Classic Sauvignon Blanc 2010 Chosen Rows will deliver it’s signature in the future, as the goal is to make a wine with longevity.
If the aroma of grass, stone fruit and flint hold up plus the palate of spice, grapefruit, vanilla, cream and melon are as fresh as when the wine was bottled, then Bancroft Estates ‘Chosen Rows’ is a hit.
My bet is on all those who were involved with Peter Materman and Bancroft Estates in this project.
A few bottles of newly purchased and hard to find 2010 ‘Chosen Rows’ are in my basement! 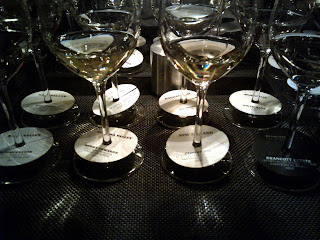