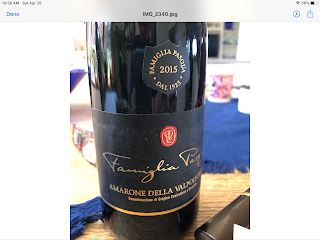 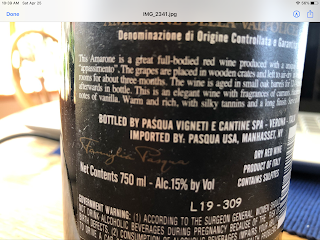 Having attended three Anteprima Amarone tastings of Valpolicella wines in Verona (Italy), I was primed for judging the new vintages, normally 100=150 producers. 2014 was an exceptional year, yet, according to the vineyards, 2015 would not be the same. I was told that the winemakers who produced a 2015 vintage with poor weather and farming would shine, just because of their perseverance.

I now can attest to that fact-the 2015 Valpolicella from Famiglia Pasqua reaches heights for a year of uncertainty. If I didn’t know about the setbacks, I would have scored the wine differently, but, knowing the obstacles, there is no doubt that Famiglia Pasqua’s 2015 Amarone would have stood out in any given year.

Several years ago I visited Famiglia Pasqua. No invitation, just my desire to meet the winemaker and see the facility. They obliged, showed me their operation and actually brought me to a local restaurant for lunch, where we sampled more wines after tasting twenty or so at their facility.

Obviously, they won me over.

During this pandemic, with exchange rates in our favor, wouldn’t it be nice to purchase a special bottle of wine? At under $40 a bottle, this should be a possibility.

The wine is deep in color, with an intense bouquet of fennel, white pepper, dark cocoa and blackcurrant. The palate is overwhelmed with a contrast of serrano chiles and raspberry jelly. Soft tannins exist, but, paired with the appropriate food, balance out.

Famiglia Pasqua sources their grapes for the Valpolicella blend of Corvina, Rondinella, Corvinone and Negrara. The grapes dry in wooden crates for five months, where their concentration increases by a third. The grapes are then pressed and fermented for a month, then are racked before being placed in oak barrels for up to twenty months.

The result is a wine that is full bodied, savory and rich, with silky tannins that leads to a long lasting finish. Its doubtful that anyone would complain about the 15% alcohol in this stellar, bargain priced Amarone.

Its destined for your Coronavirus dinner table, and if not, mine.

Wines like this Amarone aren’t released until four years after the vintage date. These wines age very well and can be drunk immediately, but, in many cases aging is desirable. With the Coronavirus as part of our reality, I opt to drink this wine as soon as possible.