"It's All About Valpolicella and You" and Me at Anteprima Amarone 2017 by Philip S. Kampe 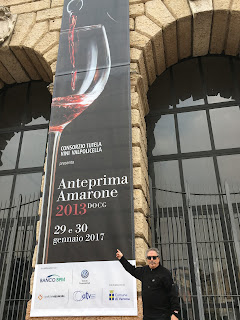 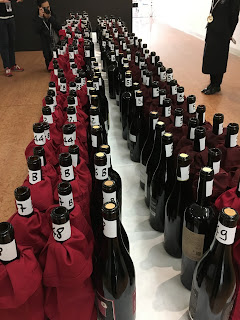 The word, Valpolicella, has a musical ring to it.
The wine, like the word, dances vibrantly and ferociously on your palate.

The Valpolicella region, part of the Veneto, is located near Verona, in northeast Italy. The region comprises eleven valleys, each unique in its own way-from the high heat index of the Marano Valley to the cool breezes from the regions western border, Lake Garda.

Partly due to the varied terroir and heat index, each of the varietals from the eleven valleys have their own distinctive taste and aroma. Since 2003, global warming has had a direct impact on some, but not all of the varietal growing valleys.

At the 14th Edition of Anteprima Amarone, which was held at the magnificent Palazzo della Gran Guardia, located in the center of breathtaking Verona, Italy, I had the opportunity to sample the 2013 harvest with members of the distinguished international press and selected industry insiders.

Thanks to the generosity of the Consorzio di Tutela Vini Valopicella and the wines from 78 wineries, the blind sampling of 83 barrel and bottle samples proved to be a reward for the palate, due directly to the exceptional quality of the 2013 vintage and the seductive powers of the indigenous grapes used to produce Amarone.

The world agrees with the seductive powers of Amarone.

Upwards of 65% of production is for export, with Germany, United States, Switzerland, United Kingdom, Canada and Sweden leading the way.

The quest for Amarone and other great Veronese wines is the driving force for tourism in the area-a great change from the time honored balcony of Romeo and Juliet fame.

With hundreds of producers and an event that culminates vintage releases, Verona is the place to be.

Add Vinitaly, Italy’s largest annual wine event to the drawing board-and you have the makings of an international wine scene.

With opera events at the Roman amphitheater, locally excavated pink marble that line the pedestrian walkways of Verona and local cuisine paired with Valpolicella, it is obvious that Verona is one of the jewels of the Veneto.

And Amarone is the wine jewel of the region.

Anteprima Amarone 2013 assessed the 2013 vintage as of ‘medium-high quality.’ The Consorzio pointed out that the early growing season was dictated by cool weather with above average rainfall, followed by desert like heat throughout the summer.

It was noted that the 2013 vintage was defined solely by opposite extreme weather conditions.  By combining the initial cool and wet climatic cycle with the extreme hot weather cycle, the ripening of the grapes had dramatic help in creating a special vintage, ripe in sugars, concentrated fruit, elegance and weight. The wines from Negrar Valley were assertive and elegant, while fruit reigned in he Mezzane and Illasi Valleys.

As noted earlier, each valley prospered independently from the climatic divergence in 2013. Valpolicella means ‘valley of many cellars’, whose most famous valley is Negrar, considered the icon in the Valpolicella Classico district.

With climate change as reality, the grapes from the temperate Lake Garda boundaries are less tannic and lighter in color then their counterparts, whose daytime temperature is off the charts.

Many vineyards have replanted or added varieties that thrive in the sun, specifically the older varietals, Oseleta and Spigamonti. The hope is for subtle tannins and larger aromatics that can only enhance Valpolicella.

The classic Valpolicella blend  includes the most important varietal, Corvina, with the addition of the classic indigenous mix Rondinella, Corvinone and Molinara.

Valpolicella is unique and distinct.

The producers emphasized that there are four distinctive styles of Valpolicella.

Valpolicella Recioto: historical sweet red wine made with dried grapes.
Valpolicella DOC: fruity, light with subtle tannins
Valpolicella Ripasso DOC: a rich, full-bodied style with lots of bitter cherry
Amarone della Valpolicella DOCG: a high alcohol, rich, spicy, dry wine with a touch of sweetness due to the grapes that have dried for several months before the winemaking process (known as the appasimento method)

Some winemakers use modern technology to blend Amarone, while others follow tradition and some are somewhere in between the two.

As a new student of Amarone della Valpolicella, I have decided to sample a bottle from each of the eleven valleys and compare one to the other. The variables for each bottle exists-weather-winemaking style-terroir-and grapes used.

Before putting the eleven bottles side by side, I would like to thank the Consorzio di Tutela Vini Valpolicella for opening my eyes to what Valpolicella is and what it is to the world. I saw the passion, care and love that the winemakers have for their beloved Valpolicella and unity for its success.

Anxiously, I await the opportunity to sample the 2014 vintage in January 2018. The winemakers have said that it was a difficult vintage and those who have created Amarone della Valpolicella 2014 may have created a legendary wine.

My favorite wines from the blind tasting of Anteprima Amarone DOCG 2013 were produced by: 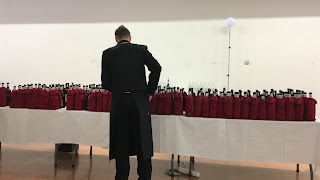 The task of sampling the eighty-three 2013 Amarone della Valpolicella involved several hours. The tasting was set up in two large rooms. At least fifteen sommeliers poured the wines in groups of four. Each participant rated the wines accordingly. Many were barrel samples and were noted by the sommelier upon presentation, others were from the bottle-ready to be released.

In my case, the first 48 wines took close to three hours,when palate fatigue set in. After a two hour break, I returned to sample the final 35 wines. 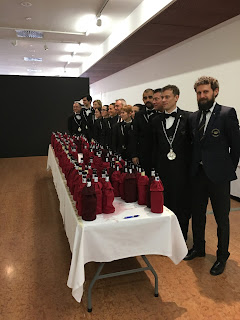 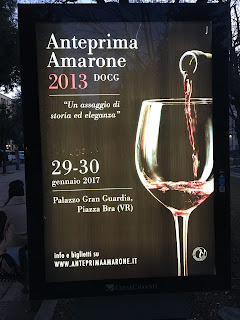